East Budleigh is an ancient village, well-established by the time of the Norman Conquest in 1066, and called Bodelie in the Domesday Book. It was probably settled by invading Saxons during the late 7th or early 8th century.

In the Domesday Survey of 1086 a substantial Royal Manor was described with boundaries approximating those of the present parish. It most probably had a church in Saxon times, in the prominent position where the present church now stands.

The birth place of Sir Walter Raleigh, Hayes Barton, is in Hayes Lane about one mile outside the village. 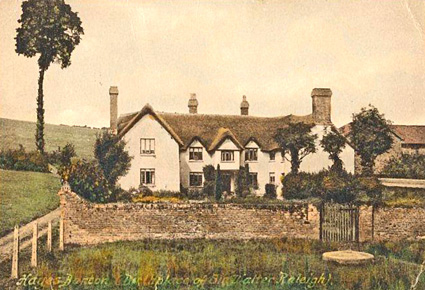 The Raleigh family settled in East Budleigh around 1537 and leased Hayes Barton from the Duke family, who owned it for 400 years. Sir Walter Raleigh was born there in 1552.

Roger Conant, founding father of the city of Salem, Massachusetts, was also born in East Budleigh. He sailed for America in 1623 and, together with a band of courageous followers, established a new settlement at a place called Nahum Keike. This Indian name was later changed to Salem, "city of peace". A bronze statue of Roger Conant now stands outside the Witch Museum in Salem.

Vicar's Mead, erected in 1485, was the old Vicarage House used by successive vicars until the 19th century. The young Walter Raleigh was educated there. The Reverend Ambrose Stapleton who was vicar for 58 years lived in the house until his death in 1852. He was a vigorous, kindly man who preached tremendous sermons but who was also involved in the lucrative trade of smuggling. A secret passage leading to a cellar was probably used for smuggling brandy and other contraband. At that time East Budleigh was a centre for the distribution of smuggled goods.

All Saints is an exceptionally fine church, largely 15th century and built on a lofty eminence overlooking the village.

Sir Walter Raleigh's father was churchwarden here in 1561, and the Raleigh pew (1537) is the second on the north side of the nave.

There is much of interest to be seen, including many carved benches of the 16th century. An illustrated guide book can be bought in the church.

Bicton House, built for Lord Henry Rolle in the mid18th century, is now an agricultural college approached by a splendid avenue of monkey puzzle trees. Its magnificent Grade 1 parkland, separately managed, is open to the public as Bicton Park Botanical Gardens. Covering 63 acres, it is a world-renowned arboretum established in the 19th century, and includes many champion trees as well as a palm house, orangery, woodland railway and countryside museum.

Salem Chapel which stands on the northern edge of East Budleigh was originally Presbyterian  dating from 1719. It later became a Congregational chapel and school and has served other non-conformist congregations. The Chapel is now owned by the Historic Chapels Trust and was restored in 2006.

Facilities available in the village.

There are two popular pubs both offering a good selection of meals, wines and beers. The Sir Walter Raleigh is in the High Street and the Rolle Arms is at the junction of the B3178 and the turning into the village (Lower Budleigh).

There is also a thriving community shop and information room next to the Village Hall, in the centre of the village. A free guide, the OVA leaflet “A walk around East Budleigh”, is available in the information room and the shop and to download here.