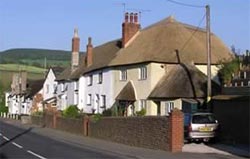 Newton Poppleford, as the name implies, started as a Saxon ‘new town’ by the pebbly ford. It’s possible that there was an even earlier settlement here, as the Roman road from Exeter to the port at Axmouth crossed the River Otter not far from the present bridge.

One of the earliest written records is the Royal Charter granted in 1252 to hold a three-day fair at St Luke’s-tide (18th October). Apparently the ancient fairs were very lively and noisy occasions and, although they died out over 100 years ago, the more recent annual Carnival at the beginning of October vies for both noise and spectacle.

Transport has always been a theme for this long village of thatched cottages mixed with modern buildings along the A3052 main road, which runs from Exeter to Sidmouth and eastwards along the Jurassic coast.

There were mentions of a bridge over the river in 1259 and 1492. In 1809 there was an awkward five-arch bridge which was replaced in 1840 by the present structure.

This was built by James Green, the first County Surveyor for Devon, and was one of only three bridges on the Otter to survive a great flood in 1968. The road was improved by the turnpike, who built toll-houses. The one at the junction of the Exeter and Exmouth roads was built in 1758, and is thought to be the oldest remaining tollhouse in Devon.

The railway arrived in 1874, and encouraged a number of local businesses, but sadly the branch line did not survive the ‘Beeching cuts’ and closed in 1967. The track bed over the hill through Harpford woods is now a permissive bridleway and is an attractive link to an extensive network of paths covering the area, from the heathlands in the west (with an important RSPB reserve), through the farmlands of the Otter valley to the ridge of wooded hills to the east. 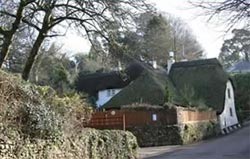 The village is a good starting point for a number of walks exploring the area. The East Devon Way, a long-distance path from Exmouth to Lyme Regis, passes through both Newton Poppleford and Harpford. The Lower Otter Riverside Walk leaflet describes the riverside walk from Budleigh Salterton to Newton Poppleford.

Public transport consists of a half-hourly bus service between Exeter and Sidmouth and an hourly service to Exmouth via Budleigh Salterton. The ‘Jurassic Coast’ long distance bus makes six journeys a day in each direction linking Exeter and Weymouth.

The tower of St Luke’s church is 14th century, and is said to have been built on the site ‘where an ancient chapel stood’ – perhaps a Saxon church? The rest of the church was rebuilt in the1870s, and has some interesting features. Across the river, Harpford church dates from 1208 and remains a haven of tranquillity. Its claim to fame is that the Revd Augustus Toplady, author of the hymn ‘Rock of Ages’ was once vicar here.

Apart from cream teas, Newton Poppleford’s main claim to fame is as the home of the King Alfred daffodil. It was bred here by the Hill family, and received the RHS Gold Medal in 1899. Although the original field now has houses, clumps of bulbs were planted round the village for the centenary celebration, so King Alfred daffodils can be seen around the village every March.

Harpford and Venn Ottery are now part of a joint civil parish with Newton Poppleford, although linked as a church benefice for at least seven centuries until 1933, when Harpford was joined with Newton Poppleford and Venn Ottery with Tipton St John. The small village of Harpford is noted for some pretty thatched cottages, much photographed, and the view of the church tower of St Gregory's from the attractive walk along the River Otter. There is a cross in the churchyard as memorial to Augustus Toplady, author of 'Rock of Ages', and vicar here for a couple of years in the eighteenth century. The disused Sidmouth branch railway track up the hill to the Bowd is now a permissive path and makes a lovely walk through Harpford Woods.

Venn Ottery, mentioned in the Domesday Book, has another ancient church dedicated to St Gregory, with a Saxon tower which survived an eighteenth century fire which destroyed much of the village. The largest surviving building in the village is Venn Ottery Barton, built about 1530, with huge fireplaces and some fine Tudor timberwork. Run as a hotel in the second half of the 20th century, it is now a private house.

Further details can be found in the OVA book ' Historical Guide to the Lower Otter Valley'.

Facilities available in the village

The Cannon Inn offers accommodation and a range of good food, real ales and a wide selection of wines.

La Rosetta is a Trattoria Italian Restaurant offering a wide range of Italian foods and wines.

The Rickshaw Express in the centre of the village offers Chinese food and a fish & chips takeaway. The village is also served by a cafe; the Southern Cross, which offer the visitor a wide choice of meals and cream teas.

The Village Store & Post Office provides local grocery and newsagent facilities. There is also accommodation available from the several bed & breakfasts in and around the village.