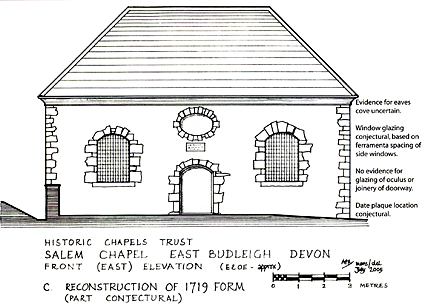 Reconstruction of 1719 from drawing by Anthony Rossi

The first chapel: Foundation and Construction

On Salem's front wall is a rectangular datestone marking its 1719 foundation with a sill added to record an 1836 enlargement.  In 1719 when the dissenting congregation at East Budleigh moved into their new building they transferred, it seems, from more temporary accommodations (possibly a barn or large cottage) at nearby Frogmore (1).  The cost of Salem's construction and its minister's stipend presumably had to be funded largely from the congregation's own pockets as was usual in dissenting congregations (2).  Carpenters, masons and labourers from the congregation worked on the new building at East Budleigh free of charge.

A local landowner, John Pounceor, is said to have donated the land.  The 1735 renewal of an earlier 1719 indenture, undersigned by the new trustees, confirms that Pounceor allowed them to  have the land “for evermore under the yearly rent of twelve pence at the feast of the Birth of our Lord Christ yearly if demanded”.  “Upon special trust and confidence that they should peaceably and quietly permit and suffer a new house structure and building to be raised erected and built on the said plot”.

The deeds go on to specify that it be used as “publick meeting house for the assembling and meeting of the people commonly called Presbyterians” (3).  The original indenture was renewed in 1735, 1771, 1795, 1824, 1861 and 1885 (4).  These documents are now on loan to the Historic Chapels Trust.  The Duke family, who were squires of nearby Otterton also seem to have contributed, giving a quantity of local stone probably from the Ladram Bay area.  This is presumably the same conglomerate sandstone that was used to build the walls of the chapel.

The original chapel is roughly ten metres square in plan and its walls are very thick.  This led to the mistaken assumption they were of cob, but recent building works have revealed otherwise (5).  There is little cob.  The stone is bonded with sandy earth mortar pointed up with lime and was probably always finished with an external coat of plaster.

Studies of the front wall during recent work on the chapel produced clear evidence of the original 1719 elevation.  A reconstruction was made from records of surviving details now hidden beneath the protective rendering.  High in the centre of the front wall a segment of oval masonry is evidence of an oculus window.  When the façade was altered in the early 19th century the original datestone was reset in the centre of the blocked window.

Directly below the oculus was the original main entrance, which has also been blocked in and covered over and is now obscured by a later headstone.  On either side of the doorway at mid-height were two tall windows with segmental arched heads, which have also been blocked.  The original windows remain on the north and south sides of the building; those at the rear of the chapel were enlarged in the early 19th century (6).

The square plan of the chapel required a very wide roof span, too wide for a single beam.  The solution chosen by the builders gave the building a highly unusual and interesting roof structure.  They decided to put in a single central timber column to support four A-frame ranges with hipped ends. Each side of the building corresponds to one range of the roof and the four ranges form a square around a central cavity.  This central dip behind the ridgelines of the roof is deep enough to enable a man to stand unseen behind the roofline.

The basic A-frame element of the roof construction is not unusual for the period or the location.  It is the way this traditional A-frame has been inventively and ambitiously adapted that makes the roof so singular.  The timbering arrangement is complex; the main diagonal trusses run from the outer corners to support what a recent report termed “a kind of timber cradle in the middle, which supports the inner principles of two trusses along each side.”  The report further explained that “these pairs [of trusses] are flanked by half trusses built up against the diagonal main trusses” (7).  It is thought that timbers would originally have projected out at the top of the chapel's walls to carry a coved eaves cornice (8). 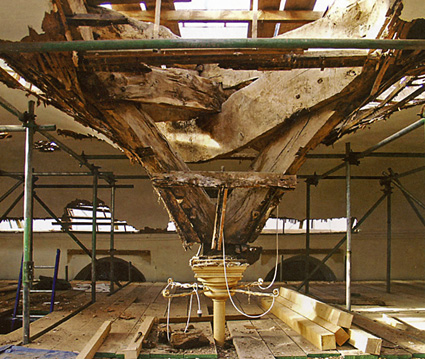 Timberwork of great ingenuity, before restoration, 2005.

On entering the chapel the central column still defines the interior. The quadripartite vaulted plaster ceiling springs up from what is now a new steel and timber column of functional appearance, but originally the column had a classical appearance with an Ionic capital.  Unsurprisingly, given the heavy load it bears, the original column has been replaced twice since 1719.  The roof structure concealed above the plaster ceiling is, however, largely original.  The central post design kept the sightlines in the building largely uninterrupted and gave the congregation an open, airy, chapel (9). 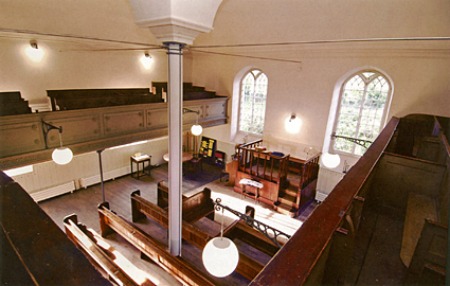 Later Alterations and Renovations of the Chapel buildings

Though the basic structure of Salem chapel has not changed since 1719, the interior that we see today began to take shape at the beginning of the 19th century.  The east gallery above the entrance was one of the earliest additions; a note in the church account book for the 15th of January 1810 records the balancing of an account with Mr Williams “for building the Gallery”, and there is also record of a gallery being erected for the “singers” in 1814 (10).  The mechanism of the clock on the front of the east gallery seems to date from the mid-18th century but when it was installed in its present location its dial was replaced by John Murch of Honiton.  As Murch was active in the early part of the 19th century it seems likely that the clock went up at the same time as the gallery (11).

The most drastic remodelling of the building took place in 1836. The central entrance door was blocked up and new segmental-arched doorways inserted at each end of the eastern façade, perhaps to allow separate entrances for men and women.  The upper parts of original windows were also blocked up and their sills knocked out to create these doorways (12).  It is likely that the arrangement of the internal stairs was altered at the same time.

The two side galleries on the north and south walls were erected  contemporaneously; their cast iron supports a sign, in this rural Devonshire chapel, of early 19th-century industrial technology.  The gallery fronts have decorative panels and blind geometric fretwork.  The shape of the western gallery front, made taller in the 1836 renovations, stops just short of a pointed Gothic arch, rounding off to balance the existing windows and doors.  Their intersecting Y-tracery glazing pattern gives them the Gothic presence so fashionable at this point.

It is possible that all the timber mullioned window fittings in the older window openings on the north and south walls were also replaced in the 19th century (13).  The box pews that remain in the galleries are contemporary though some are missing and others have been altered.  They have panelled seats with shaped ends and are integral to the intimate feel of the building.  The backs of these gallery pews are now covered in graffiti recording generations of bored children.

A recent survey discovered a gap in the eastern roof structure indicating that an architectural feature once pierced the roof directly above the 1719 oculus window.  The unevenness of the wall in the eastern gallery shows where an opening has been blocked up.  The most likely explanation is that the roof had a dormer window (14).  It was also in 1836 that the central timber post dating from 1719 was replaced with a new cast iron post.  This must have been a very delicate operation.

Apparently “the chapel was closed for enlargement when the side galleries were erected and other alterations were made”.  It was re-opened on Good Friday, 1 April 1836, and “the whole of the expenses were liquidated during Mr Croome's ministry and chiefly we presume by his indefatigable exertions (15).”

The date of the Vestry in the North West corner is unknown; but an account for a new lock for a “Vestrie” is recorded in the accounts for 1808.  The Vestry's quirky uneven structure was evidently another ad hoc addition and has been altered since it was built (16).

Notations on an old floorboard found during the recent works provide further record of alterations made to the chapel.  A Mr Gale repaired the chapel's floor in 1884, an appointment that is reiterated in the Church books (17).  A further note on the floorboard tells us that electric lighting was installed on the 17th of November 1937.  Between the vestry and schoolroom is a tiny burial-ground. Surviving head¬stones inside the front boundary wall attest to more burials and the burial-ground may once have been larger.

In the 1980’s the chapel came to be owned by the Assembly of God who then sold to it a private owner.  By the 1990s it had fallen into a state of disrepair and a local action group headed by Kathy Moyle brought it to the attention of the Historic Chapels Trust.  In 1998 it was acquired by the Historic Chapels Trust with the aid of a grant from the Heritage Lottery Fund.  After initial shoring-up and a full structural assessment the main contract work on restoration commenced in October 2004 and was completed in 2006 at a cost of £700K.

Link to Salem Chapel Part 1: History, beliefs and life in the congregation.

In the course of writing this guidebook I have had cause to be grateful to a number of people. I owe a particular debt to a previous work by Roger Thorne FSA on Salem Chapel.  I must also thank Dr Jennifer Freeman and Steve Pilcher at the Historic Chapels Trust for all their help and Mr Polson for the kind loan of deeds in his possession. My gratitude also to Kathy Moyle and Marg Crone-Smith who helped point me in the direction of some of the more colourful episodes in the chapel's history; Salem's revival is a fitting tribute to their passion and drive. Neil Burton provided some editorial assistance, with additional comments made by Christopher Stell.

Extracted and Reproduced from “Salem Chapel, A History and Guide” by kind permission of the Historic Chapels Trust www.hct.org.uk

Events and open days are published in www.hct.org.uk and the local Tourist Information Bureau http://www.visitbudleigh.com/