This carving shows a three-masted and armed merchant ship with a skeletal hull in a carrack shape. A previous article covers descriptions of the bench-ends of All Saints more generally. 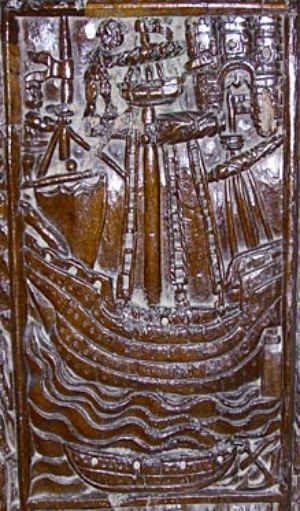 The multi-masted rig, introduced during the 15th century, “optimises windward ability and provides the potential for efficient tacking”(i).   Such ships were at a peak of technological innovation, making possible Trans-Atlantic voyages of sufficient frequency to sustain European colonies in the Americas.

However there are no records of this ship’s history and close examination of the picture prompts questions about interpretation of the ship’s provenance, dimensions and purpose.

The picture is one of more than sixty early Renaissance carved bench-ends in All Saints Church(ii); one is dated 1537.  (see also OVApedia article The Carved Bench-ends of All Saints Church, East Budleigh)  The image has been described as “the dominant picture of a large ship”(iii).  The detail suggests the carver worked closely with the ship’s owner.  It may be a ship portrait, but whether it portrays an East Budleigh ship is questionable.

Until the late 15th century Ottermouth, or Budley, Haven, was a tidal estuary extending some 7 km inland from the sea.  There were landings all the way up the haven, but the main ports were East Budleigh and Otterton where the harbour lapped Anchoring Hill at Otterton and Pullhayes Farm buildings at East Budleigh with broad creeks up Budleigh and Otterton brooks, and narrow creeks at Kersbrook and Bicton.   However the haven was slowly strangled by the longshore drift of shingle across the mouth of the Otter.  Silt accumulated upstream for centuries and periodic storms added catastrophic deposits of shingle.

The port finally closed to deep-sea shipping around 1470(iv).  Shipping operations were moved to Exe ports(v), though ship-owners continued to live in East Budleigh(vi).   Walter Ralegh senior’s ships sailed from Exmouth from 1518 to 1555 (vii) and Matthew Andrew’s home port was Ottermouth in 1474, then Topsham in 1482(viii).  Exeter Castle is pictured at the top right of the carving indicating an Exe estuary home port(ix).  See also OVApedia articles on The History of the Otter Estuary, 1086-1320; and its sequel for 1320-1500, and on The Ottermouth Port & Sea-going Trade)

Fine detail on the bench-end suggests the carver worked closely with the ship’s owner.  The ship’s main-mast parrel (the collar around the mast with wooden rollers or trucks to ease the raising and lowering of the main-yard) has two rows of trucks, of which one row has been eroded in recent years (x). 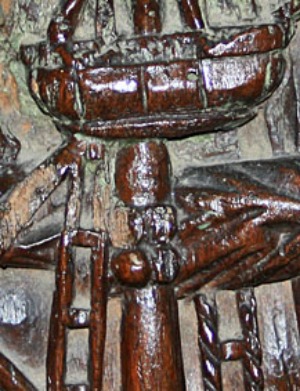 If this is compared with the five rows on the main-mast parrel of the Mary Rose, 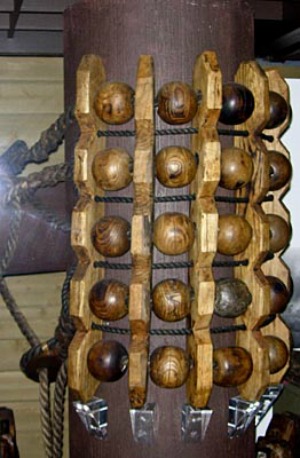 we may conclude that the East Budleigh ship’s main yard was two-fifths the size of that the Mary Rose and allowing for the weight of her artillery and personnel, we may infer that this was a ship of 200 to 300 tons burden, too big ever to have operated from East Budleigh.

Compared with up to date rigging the rig of the carrack hull appears old-fashioned.  Unusually in a large ship of this date it is carvel-built, ie. with planks edge-to-edge on a previously built frame, the Mediterranean style.  This was a faster and cheaper way to build than the North European clinker style of overlapping planks secured by clench nails.

The southern style of building had attracted North European ship-owners and began to be constructed in northern shipyards during the 15th century, but the acquisition of the novel southern skills advanced slowly and, at first, appeared only in small vessels.  From the 1450s to the 1590s the burden of most new English-built ships was between 50 and 100 tons.  That this was a Mediterranean-built ship is supported by the Jacob’s ladders, the means of going aloft favoured in Mediterranean ships. 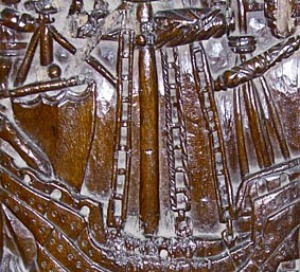 They are fixed with only one deadeye, a mistake suggesting the carver’s (and owner’s) unfamiliarity.  The usual northern style of ratted shrouds is also depicted, a transition during re-rigging.

The innovative rig, on the other hand, was of the latest, three masts with main and fore-topmasts.  Generally fore-topmasts were not known before 1495 (xi).

The ship could have been foreign prize, bought by an East Budleigh ship-owner after capture to take advantage of the trade recovery in the 1490s, following a profound depression of several decades.  The new owner would have refitted the ship with a sail plan, perhaps to carry cloth exports and on the return voyage, canvas to pack the cloth.

The ship’s guns also support the ship’s portrayal in the 1490s.  Seven ports in the port side gunwale are shown for anti-personnel weapons, Callender suggests serpentines.   He argues that this kind of ship, if pictured sailing, would have had holes in the hull for the heavier cannons that were coming in after 1500.   The small gun-ports indicate an earlier date (xii).

The seamen in the carving are not in scale with the ship.  The crew would have numbered about twenty-five, including up to eight soldiers and at least one experienced gunner to maintain the guns and to make up grenades and fuses.  Some have supposed the guns show that the ship was involved in piracy.  Whilst any suitably equipped ship would take any opportunity for plunder, it does not seem likely that so lightly armed a ship would have been a pirate. 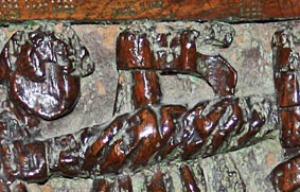 has suggested to others that the ship carried pilgrims to Corunna for the shrine of St James at Compostela, a flourishing trade of Devon ports until foreign pilgrimages were banned in 1536.  This is improbable given that ships’ pilgrim flags, such as that in the Marienkirke, Lübeck from a captured a Danish ship of the 1420s, displayed a closer connection to St James, his emblem, a scallop shell.

The guns would have equipped the ship for a long, unusually risky voyage, such as like the successful venture to North Africa of the Trinity of Bristol in 1480-81(xiii).   The pennant would have been useful on such a voyage to the Mediterranean where indigenous Christian ships frequently confronted Moslem pirates and displayed a cross rather than a national emblem (xiv).

Researched and written by David Jenkinson, © 2010

(ii)T N Brushfield, The Church of All Saints, East Budleigh Part II Transactions of the Devonshire Association (Trans DA) no 24 1892

(iv)Leland’s Itinerary, 1530-40 reported this to have been earlier than in living memory

(v)Matthew Andrew’s Ottermouth ship James was involved in a dispute about cargo in London in 1474 (Gardiner West Country Shipping no 89).  He built a new ship, James of Topsham in 1482 to benefit from Henry VII’s remission of tax on first voyages of new ships (PRO c76)